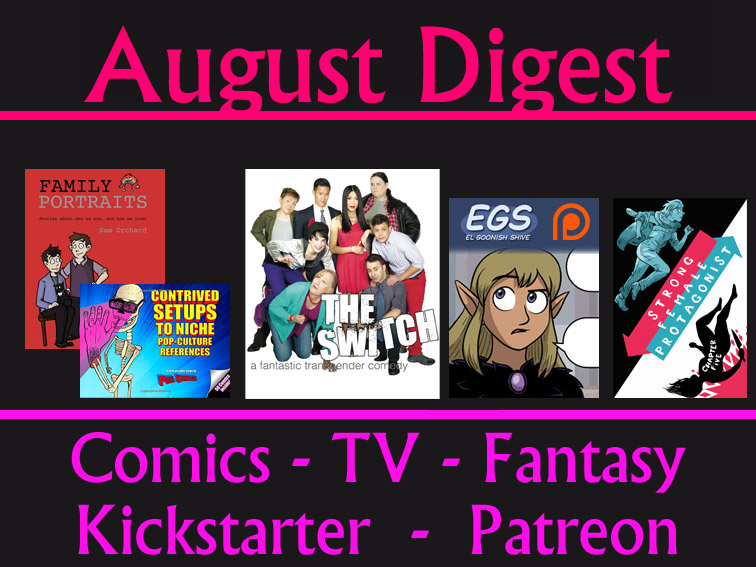 It’s been a while since I did one of these – and I think a new digest is long overdue: Feast your eyes upon these colossai of creativity! 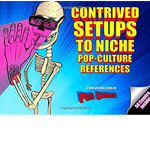 The comic medium suits Paul’s style incredibly well – He’s like the bacon of comedy: big, delicious and addictive pieces of wit, in bite-sized strips.
Check it out on Amazon: [Only £4.99] 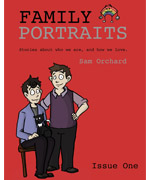 Family Portraits
Sam Orchard’s comic series Family Portraits is now on Gumroad!
After a successful Kickstarter, Rooster Tails comic creator Sam Orchard got the chance to make a series he’s been talking about for a long time – Family Portraits. Stories about who we are and how we love.

I’ve been excited about this project for a very long time – as Sam is one of the most tear-inducingly honest and point-fuelled writers of autobiographical Trans stories and educational comics out there. His latest series looks to broaden our understanding of identity and love by bringing new, true, stories to us from diverse individuals, in comic form.

The Kickstarter also raised money for him to visit the US, do comic conventions, meet up with people and and do talks about his work and experiances. Through September and October he’ll be hitting up Portland Oregon, New York, Chicago Illinois, and San Francisco California.
Keep an eye on the Blog under his main comic for updates, and a full list of where/when he’ll be doing talks and signings.
He’s also open to suggestions of where to do talks if you have anywhere in mind he isn’t already going to.

The Switch Kickstarter
Speaking of new Trans representation in media!
The Switch is an incredibly fun upcoming sitcom, following the misadventures of Sü, who after coming out at work swiftly finds herself out of a job, apartment, and comfort zone.
Whilst all this sounds negative, the show’s pilot reveals an incredibly positive outlook; with coming out and being herself making Sü incredibly happy, optimistic and resourceful. And the prospect of presenting male for potentially easier employment being painted as so depressing and wrong it just isn’t an option.
The pilot also shows a great use of contrast, with Sü’s problems after ‘The Switch’ being the least crazy, dangerous or fantastical of anyones – job & apartment hunting are pretty ‘normal’ problems that everyone can relate to. The other character’s dabblings into sorcery and crime? Not so much.

And not only will The Switch be bringing a transgender lead character to our screens for the first time – Sü will be played by openly trangender actress, vlogger and make-up artist Julie Vu, known on YouTube as Princess Joules.
This counts the 3rd TV series I’m aware of ever doing this. The others being the famous Netflix original Orange is the New Black, with Laverne Cox as Sophia Burset, and Bethany Black’s upcoming role in Russell T. Davies’ Channel 4 shows Cucumber & Banana.

The show has already passed it’s Kickstarter goal for extra funding, so it’s we’re already set to see it’s Season 1 debut soon, but there are still some great stretch goals to unlock, and a series with this much potential deserves all the funding it can get. 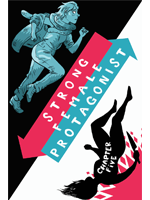 But even without all of it’s clever meta critiques, questions and analysis, this is a very solid comic about a young super-powered girl forced into the limelight, trying to reclaim control of her life.

It’s seriously good and in places incredibly dark and mature – love it! Read it!
The kickstarted book will be out soon, but for now: [Read Online For Free!] 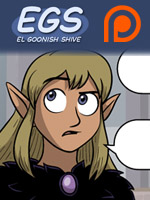 El Goonish Shive – Patreon
I adore El Goonish Shive.
It’s well-paced, the plots are built up and seeded incredibly deftly, the art is gorgeous and expressive – it is full-on fantastic.

But I’m always apprehensive about recommending it to people because all of those points are double-sided.
It’s coming up on 2000 pages (a HUGE backlog), you kinda need to read all/most of it because of the running plots, character growth and continuity, and the art is amazing because it’s developed over 12.5 years – the earlier strips have a vastly different style and quality.

1. The current plot arc is somewhat self-contained; it’s very character-focused, hilarious and works pretty well as a starting-off point.
The comic is normally slice-of-life coming of age with magic and occasional fighting antics, as opposed to the current focus of card games, but I really recommend starting [Here] as a great way to see if you’d like to read more.
Current arc features; geek culture social commentary, discussions of non-binary gender, totally not Magic The Gathering, adorable shippable characters, terrible troupes being turned on their heads, and Star Wars. Quite a bit of Star Wars. 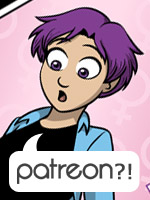 2. EGS:NP, the non-canon random fun-stuff side-comic of EGS is soon to return from hiatus!
Thanks to creator Dan Shive’s very successful Patreon launch, a lot of new content existing outside of the elongated canon, generally just having some fun with the characters during their day-to-day, is gonna start updating.
This means a somewhat fresh start you can enjoy right off the bat!

Now really is probably the best time to check out EGS. There is a rather large backlog to get through if you want to keep up with the best laid plans, but if you have a little taste you may well find it addictively delicious 😉