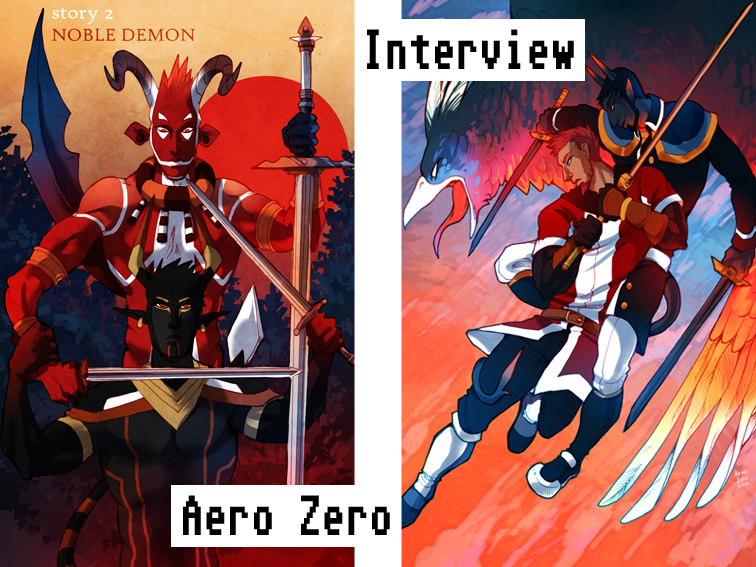 Aero Zero is the writer and artist of some of the most gorgeous and richly coloured fantasy online right now. I was linked to their comic Men+Monsters by a friend, and read the entire thing in one hungry binge – It’s so rare to find an NSFW comic with this much creativity, design and good/realistic kink & poly representation: it’s no wonder their other works share this fantasy world; it’s has far too much potential to squeeze into a single thing.
I jumped at the chance to talk to them about it. 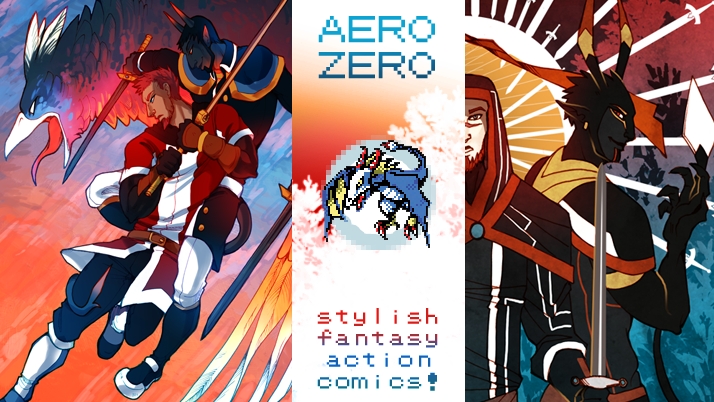 Whew I can hardly keep track myself!
I divide my work into my personal projects, Filthy Figments projects, anthology ones and colorist work.

My personal projects are currently Ace of Beasts and Men+Monsters – two yaoi comics about men and their monster / non-human companions. They’re both action-adventure fantasy romances with lots of smut, AoB being about best-friends-with-benefit in an open relationship and M+M being about a poly trio.

M+M has changed a lot since it started – I originally made it a bit serious, with a melancholy tone and a theme focused more on hurt/comfort. I played it straight until the start of Chapter 2 when I realized all the questions Silas might have (‘does he love me for me?’ etc.) and it made me want to see them answered / worked out.
I realized the characters were self-aware of their own story and maybe the genre as a whole and it fascinated me.
I think at the start of Chapter 2 I really started loving everything about M+M.

As for Ace of Beasts, I consider this one a partial reboot of another one I was doing. Some of the characters remained unused in this story, most of the male characters made the transition to this one, haha.
It’s is about two swordsmen who go on a quest to find the sorcerer who unleashed monsters upon the land to kill him and reverse a curse that turned one of them into a monster himself. It stars Xerxes, a disciplined swordsman who is soft at heart despite his bloodlust; Osric, his vain best friend-turned-monster who is driven by animalistic desires; and Lilavath, their excitable / snooty pet gryphoenix who is just happy to be around them.

Xerxes and Osric are from another comic I used to do, but they are not at all the same people from that story. This one is completely separate, and actually has a bigger story / design tie to my Filthy Figments one-shot, Heart of Gold! If you’ve read that one, you may notice a few similarities here and there.

There are some silly things happening in Ace of Beasts that have a connection to Men+Monsters. Xerxes has a collection of novels from a certain author who writes monster smut for example.
And instead of monster people and robots, there are animal people / demons as the focus of the sexual encounters in AoB ;>

I currently color an ongoing superhero comic for a client. I can’t elaborate on this one too much since the story isn’t out for a while {:> 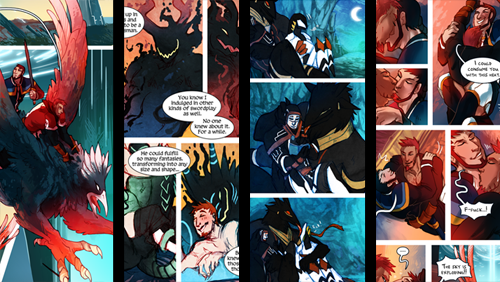 – Last month your long-running comic Kyria celebrated it’s 2nd anniversary, and declared it’s upcoming reboot. For how long had you been thinking about doing this?

Probably for about a year now. Ever since the end of Chapter 2 of Kyria, I started questioning my enjoyment of it. There are other factors that made me want to end it and ultimately, I think it was the right choice. If something’s not working, change is always a good idea.
Fun fact: Ace of Beasts started on March 17th, which would have been Kyria’s second anniversary. I did not plan this, haha.

I consider Ace of Beasts a partial reboot and a huge improvement over the original, with the other characters not included in the transition waiting for their own story.
Kyria was practice, a time capsule, and taught me how to color and paint trees – It’s more like the comic equivalent of an in-joke so it will not make a lot of sense upon re-read, haha.

– Kyria had some brilliant Video Game & RPG parodies in it, (Monsters that eat coins, brilliant! :D), are there any particular games that inspired you in writing it?

Xerxes actually came from the character I made for laughs – Hawke in Dragon Age 2. I love the RPG / JRPG genre in general and there’s probably some little nods to my favorites in their behavior / design.
I would say that Kyria in general was like a love letter to things I liked a long time ago, a comic to have some fun with old characters and ideas.

– You describe Ace of Beasts, as “another yaoi Aero always wanted to see out there”, is this because of the recurring tropes of existing Yaoi, that you wanted to read something without, or because of the content of M+M that there isn’t really much with?

The recurring tropes of existing yaoi don’t appeal to me, so I make ones I want to see instead. Lots of smut, an entertaining story, and memorable diverse characters with nice designs 😀

AoB came from a desire to see a polished action-fantasy-romance with characters I loved, and lots of smut. Xerxes and Osric, along with Lex and Silas, are my favorite characters I’ve made and I wanted to do them justice. Also, Xerxes is my personal ‘most attractive human character’ and I needed to find an excuse to draw him again, haha.

Ace of Beasts differs from M+M in that the focus of their sexual encounters outside their partnership features a different set of ‘species’, and the setting is different, and the main characters’ personalities / kinks are pretty different from M+M’s.
Xerxes and Osric are a little more disciplined than Lex’s group, but their flaws are definitely just as bad / funny to me, haha.

– Your art style is so FULL of gorgeous design! With characters like those from the upcoming Filthy Figments comic, Avis, how and when do you start adding the body art – is is tribe or species specific? Or personal to each?

Ah I love markings! It makes the characters sometimes look like masks or animals in the features they accentuate.
It’s specific to each person, but monsters and animal people have markings to make them appear less human. In Avis, as the title suggests, the markings are meant to make them look like birds. Nascha has little dots on her cheeks like parakeet dots, Kiro with hair and face markings that resemble a tree sparrow’s face, and Rok with stylized falcon marks.

In Men+Monsters, the monster people are meant to resemble living ancient masks.

– What is your favourite thing to come from your Patreon launching?

The possibility of making certain goals come true – I do this for a living, and Patreon certainly helps!
I really want to print my stories and make little things here and there of the characters, but financial reasons dictate how much extra time and money I can dedicate to my projects which usually isn’t a lot.
With Patreon, hopefully I can finally print my stories someday, and my supporters can enjoy more of my projects coming to life 😀

As for actual things coming from the Patreon launch, I love this private little NSFW blog I’m keeping.
They’re naughty sketches of whoever I want to draw at the time and it’s fun to put up that kind of stuff for people to enjoy, haha.