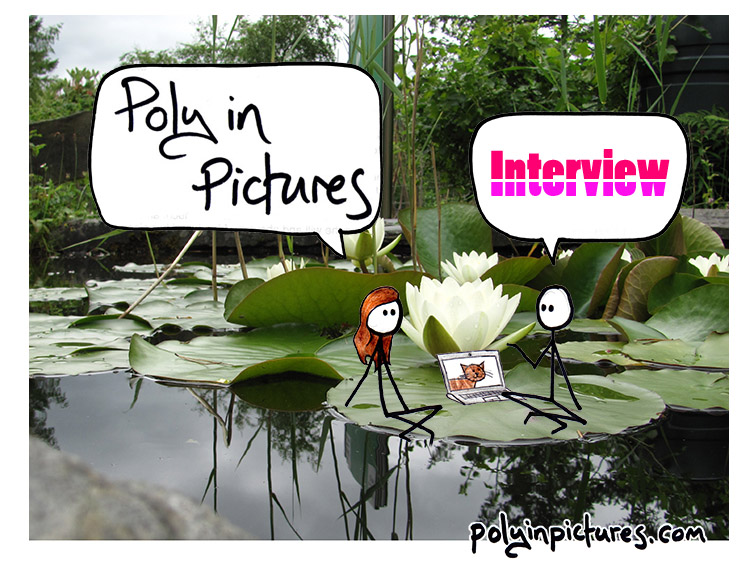 After hungrily blitzing through the delightfully punderful comic Poly In Pictures, I asked creator Cassian Lotte Lodge (twitter/tumblr) if they’d like to chat about art, knitting and LGBTQ representation.
And after much fan-personing over Doctor Who – we eventually did that.

How would you describe your comic, Poly in Pictures?
Cassian: I am a very literal person, to warn you in advance!
I would describe it as stick people on photographs talking about polyamory, gender, and sexuality – much of it inspired by my shower thoughts and making myself laugh.

Where do you find or take those photos for the backgrounds?
Cassian: Sometimes I have an idea for a “scene” and I go looking for a suitable background. And sometimes I see an interesting background and it tells me what it wants to have happen in it.

I know they’re stick figures, but your art has developed over the years? Can you see the difference when you look back at older pages?
Cassian: Definitely! I’ve probably changed the pens and paper I use, and the colouring pencils – I’ve found that there are some that work better for me, and so the comics have (I think) improved pre-scanner. And of course four years of doing the exact same comic style in Photoshop means I’ve got better at that, too. And there was a sharp increase in writing quality at some point. There was a phase where I was happy and well and sociable and full of inspiration as a result – so there’s a good run of comics that were (and still are) quite popular.

Do you use other artstyles for other things?
Cassian: I don’t really make other drawing-based arts at the moment, but I would like to one day paint fantasy landscapes. This is very much a long-term dream; I need my spoons for surviving and doing what I’m already doing, for the time being. As disability support improves I hope to be trying more new things.
I also like to draw small things in great detail, which I think is connected to many of the Poly in Pictures “sets” being small things made large – like a windowsill becoming a bus stop, or Dr Love’s couch being an eraser.

Do you have any inspirations for your art, writing and humor?
Cassian: Probably… Hmmmm. I think, just my own musings that happen as a result of blog posts, Reddit posts, talking to friends and family members, etc. I can’t think of anything specific and striking.

Poly in Pictures is turning 5 this year! Are you wanting to celebrate in some way?
Cassian: I am not sure how I would do that, but I am open to ideas. I am particularly excited about setting up the Patreon page, which feels like a celebration and a motivation at the same time. Yesterday the 198th comic came out, and I think I will probably be more excited when I get to comic 200 – I’m terrible with dates and forget all the important ones, but I can count. 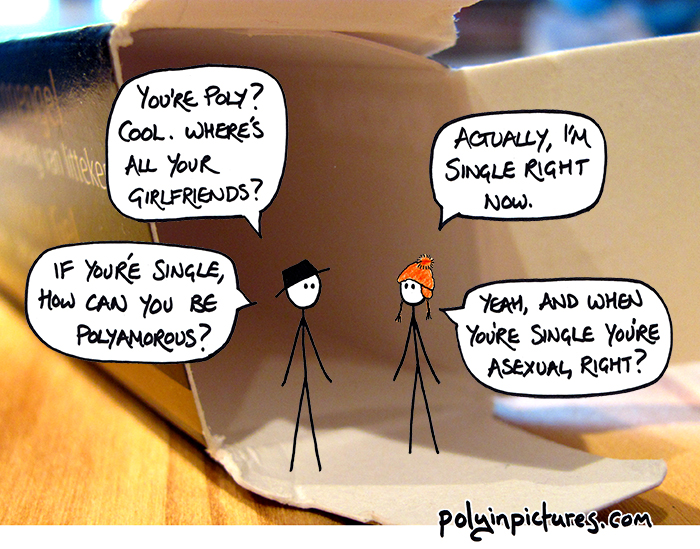 Being Triple A (Asexual, Aromantic, Agender), how aware do you feel about the lack of representation of characters with those traits/identities in mainstream media – and the large amount of independent media? Is it something that bothers you?
Cassian: I feel very aware of it, when I stop to think about it. Everyone on TV is usually a man or a woman, and none of them are like me. It sometimes makes me feel incredibly lonely, and sometimes (because no one says “hi, I’m a man!” on TV) I can imagine that maybe some of them are nonbinary, or asexual, or even aromantic. In my head, Castiel from Supernatural is definitely agender and asexual, for example.

I am more aware of poor representation of autism. Poorly written autistic cliches are much more noticeable to me, but queer misrepresentation is still very grating.

What is your advice for dealing with people who question, don’t understand or disbelieve your being an atypical queer individual? And does this problem happen to you often?
Cassian: Relationshipwise, my queerness doesn’t often come up AFK. The people I’m intimate with are all close friends before they’re anything else, and I tend to be pretty private about my personal life except with people I’m very close with, or with people who need to know. There is one exception, and I’m not sure why she’s an exception, she just is – she feels like my girlfriend to me, and I have tried so often to explain and I can’t, so I just go with it!

Genderwise, I’m a nonbinary person who’s very averse to gendered pronouns and gendered language. I have to explain it a LOT, and to be fair, most people don’t question it. It’s very very unusual for me to meet someone who just goes, “nope, your gender isn’t even real.” People are respectful and try their hardest with the pronouns (they/them) much of the time.

Occasionally I’ll tell someone I’m not a he or a she, and explain that “they” or just using my name are both acceptable, and they’ll just use gendered pronouns anyway and make no excuses. (Usually doctors and medical staff, including gender identity clinic people!) 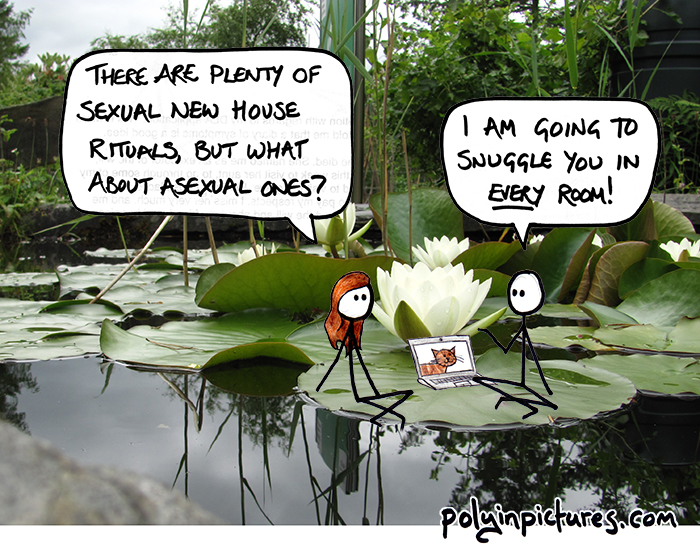 When did you get into knitting?
Cassian: I learned to knit when I was small, and then dropped it when I was bullied at school for knitting in the playground. I picked it back up in my teens when my then-boyfriend’s grandmother taught me a new stitch, and as soon as the needles were in my hands again it was like they never left. When I got CFS about 7 years ago I had little energy for anything else, and that’s when it got Serious. We are now in full-on autistic obsession territory. 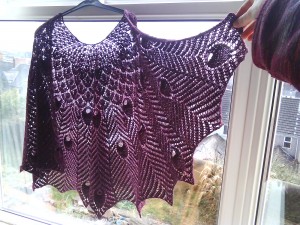 Is there a particular knitting project you’re especially proud of? (Pictures welcome ^^)
Cassian: This peacock shawl was my first ever lace project, and I am very proud of it! I gave it to a friend in the end, because I don’t even wear shawls – I just saw it and had to make it.

And my most recent “big” project is actually pretty small – but significant because it was my first published-in-a-proper-paper-magazine pattern that was in the Collection section rather than the Reader’s Submissions section. That’s Thumbs Crossed.

Have you wanted to experiment in other areas of textiles, like sewing or felting? (Really recommend felting, it’s relaxing and good fun).
Cassian: I do have a beautiful ancient Singer hand-cranked sewing machine, which I use reasonably often. I’ve also got a small bag of rainbow fibre that I intend to felt into something, but it just hasn’t told me what it wants to be yet! One day I would love to learn to weave large-scale; I’ve tried tablet-weaving and that was a lot of fun. Wow, I should do that again! Thanks for the reminder!

Poly In Pictures turns 5 years old this October, and has over 200 comics for you to enjoy already. If you like puns, cute & warm-fuzzing dialogue, or commentaries on identity and sexual diversity – I strongly recommend checking it out. PolyInPictures.com

And if you really enjoy the comic, consider supporting it through Cassian’s Patreon