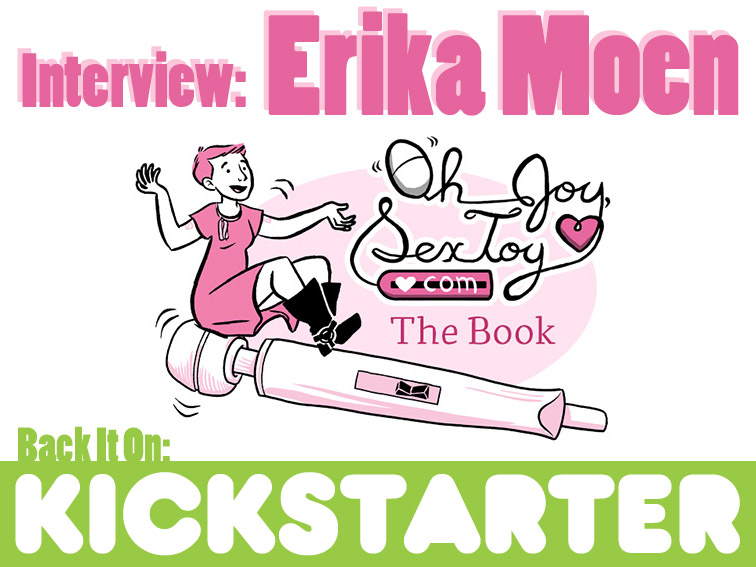 Are you a fan of comics, good sex ed, and body positivity?
Then you are probably already addicted to the humorous, delightful and educational gem that is Erika Moen’s Oh Joy Sex Toy.

Though if through some great injustice you’ve somehow missed OJST – now is the perfect time to check it out on Kickstarter!
The 220+ pages you can read on the comic’s website will soon be collected in a lovely soft-cover book, along with exclusive bonus comics, essays and behind-the-scenes trivia.

And if all that content wasn’t enough; Erika has been kind enough to answer some of my questions about the comic’s creative process and origins – Taking time out from her busy schedule of being totally rad.

1) During Strip Search you got a chance to talk business with Robert Khoo.
How did this help you refine the idea of OJST? Was it an idea that existed before the meeting?

Erika: Oh my gosh, OJST wouldn’t exist without Robert Khoo. But let me back up.
Ever since I met my husband nine years ago, he’d been telling me I should do sex education comics like my first attempt, [GirlFuck]. I’d agree that yeah, that’s a good idea, but I just never felt like it was a good time, so it never happened. Then, after I finished Bucko in 2012, I decided that NOW was the time to make that happen. So I spent the year leading up to Strip Search working on an educational, illustrated/comic guide for teenagers about how to become sexually active safely, but it was an overwhelming task and I wouldn’t have anything to share publicly for another year or two. Which meant I’d basically disappear from the internet while I worked on this and everyone would forget I’d exist and I wouldn’t be earning any income on it unless it got picked up by a publisher some time in the future.

After my elimination on Strip Search, Khoo took me out to dinner at Red Robin and I told him that I didn’t know what to do with my career and that I had this overwhelming magnum opus I was working on but it would take forever to finish and how do I make money in comics. He told me I should be giving my audience what they want right now, which is how I realized that I should be doing bite-size updates about sex that I could update each week. My husband was pretty annoyed that after years of him telling me basically the same thing, I had to hear it from Khoo before I actually got to work 😉 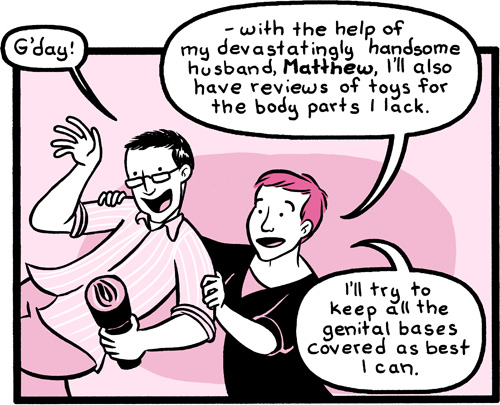 2) Regarding the collaborations with Matt on the writing and ‘research’ for OJST, who asked who first about him joining the project?

Erika: Haha, there was no asking, it was just a given! Matt was my co-creator on my previous autobio comic, DAR!, too. We always collaborate on my comics, it’s just part of the process.

3) The masturbateers make OJST one of the most diversely-cast comics out there (ironically, the only 2 recurring characters being yourself and Matt, both real people).
Is it a challenge to draw all these different body types, sizes, genders, abilities, ect? Especially considering the poses you have them in, I imagine references aren’t always easy to find?

Erika: It has been a bit challenging, yes! Because the majority of my work over the last 15 years was autobiographical, I was mainly drawing only myself and people close to me– that is, white, cisgender, and of average weight. When I started working on Bucko with Jeff Parker in 2011, I made the conscious decision to start drawing different body types and races. I’ve read a ton of articles calling for greater diversity representation in comics and as a comics creator I wanted to do my part to help change the landscape.

4) You’ve had a LOT of great guest strips so far – do you have any more planned or in the works?
Any spoilers you can share about upcoming guests, or anyone you’d particularly like to work with?

Erika: Yes! I LOVE having guest artists— not only does it give me a break from my punishing schedule of producing 4-6 pages of comics each week, it also brings in more diverse voices to my site. I’ve got already got strips from Isabella Rotman and Terry Blas waiting to go live, plus a bunch of other cartoonists who are working on theirs right now. Subjects that are either covered or may possibly be covered include DIY strap-on harnesses, Sex Lists, Korean Love Hotels, incorporating ASMR into sexy times, animal sex facts, how to give a good hand job… tons of stuff.

5) Finally – If you could have any one cybernetic implant, what would it be?
(Can be as sexy or chaste as you like)

Erika: Something to fix my eye sight! 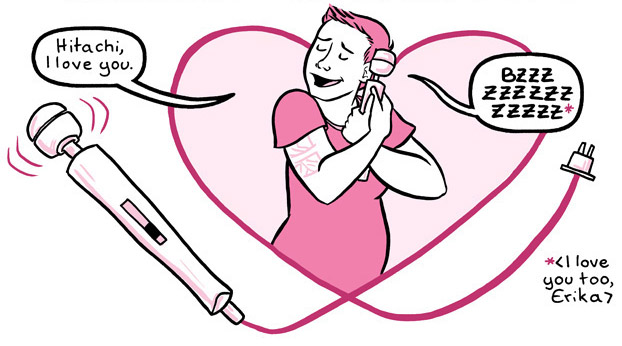 The OJST Book is on Kickstarter until June 20th, has already funded fully, and has tonnes of sexy-awesome swag up for grabs if you help back it – Check it out here: [kickstarter.com/projects/erikamoen/oh-joy-sex-toy-the-book]

Still can’t get enough Erika? – Why not support her on Patreon too! [patreon.com/erikamoen]