Okay, this one is gonna be a bit different 🙂
Kate Leth is a comics… mogul?
She writes, she draws, she reviews on her podcast, she created The Valkyries – The group/space for Women (& nonbinary individuals :D) who work in comic shops.

She kinda does everything?
And SO WELL!
So here are some of the top Kate Leth things I recommend.

Less Than Live (with Kate or Die)
Kate’s Podcast where she unabashedly gushes about comics she loves, and interviews awesome creators who make and/or love comics themselves.
What I love about LTL so much is that it’s so positive. So many online reviewers have honed in on this explosion of hyper-negative critiquing, as if it were the only thing they can do?
We have production companies now, whose ENTIRE premise is finding older, largely forgotten stuff, and just vitriolically describing why it has no redeeming value.
Personally, I think that’s a serious problem – because we end up only knowing about things we “should hate” and never promoting potentially struggling projects we “might love”.

Okay, Rant-aside, this podcast is great. The production quality is amazing. Kate just moved to America, so it’s updates are sporadic at the moment – so please bare with her and send positive messages if you like it. ^^ 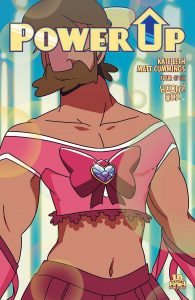 Power Up
Kate’s done a lot of writing for existing properties (Edward Scissorhands, Adventure Time, Bravest Warriors, Vampirella, Fraggle Rock, we could be here all day).
But THIS was her first original series to be published – it came out in 6 issues from Boom studios, and is now available in a gorgeous & colourful paperback collection.

3 Individuals (and a Goldfish) whose lives have reached a plateau, suddenly get incredible powers without any warning. And need to unite, figure themselves out, and try to defend their city (and maybe the world?) from all these aliens that have started appearing.

The colours are gorgeous, the dialogue is hilarious & adorable, and the characters are so diverse & different from what we normally get.
I personally really hope it gets to come back for a long-running series, because the volume ends very satisfyingly, but could easily work as the set-up for something bigger.

If you’re on the lookout for Christmas Gifts, I’d totally recommend Power Up for anyone you know who loves diverse and charming comics – For absurdly laugh-out-loud funny, however, you can’t do much better than the following: 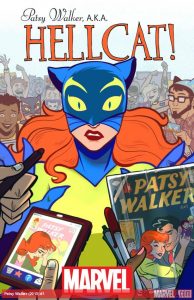 Patsy Walker, aka Hellcat
That’s right, Kate’s even written for Marvel.
After the brilliant, dark, and intense Jessica Jones came out on Netflix, Kate managed to perfectly capture the hilarious and absurd history Patsy Walker (aka Hellcat) had before the world got addicted to the ‘Dark & Gritty’.
While the show decided to make Patsy a child TV star, to help with the focus on the day-to-day oppression of women, Kate’s take is more about someone trying to move on from their troubling past, carve out a new identity, and get on with their life.

Hellcat may be able to kick butt with the best of them, but Pasty Walker knows that people are ultimately people, and if you can find and offer them a better option than a life of crime – they might just take it.

The first volume, Hooked on A Feline, is almost painfully hilarious, loves it some diversity, and goddamn if ‘Telekinian’ (A telekinetic, named Ian) isn’t the most adorable sidekick of all time.
(Sorry Bruno, from Ms. Marvel)
((Though guys, you should really check out Ms. Marvel too – the new one with Kamala Khan))

So, Check her Out!

Kate’s done a lot of work, so you’ll probably find “A Kate for Every Occasion“, if you check out her website kateleth.com
As well as links to her various other outlets of content.
Enjoy!