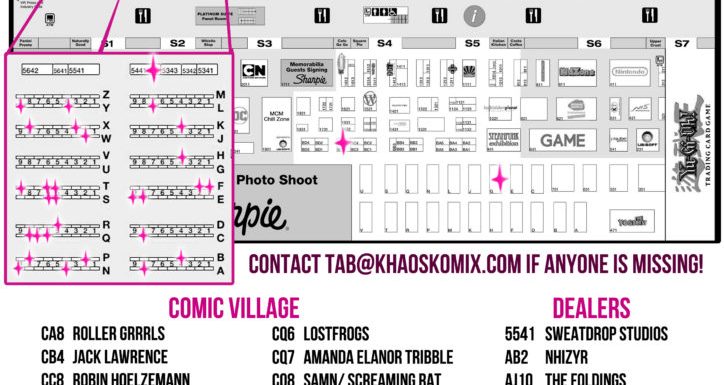 At long last Dragonhide is headed to MCM London Comic-Con!
We’ve been many times before; helping friends, just to go, and for a few years as press as part of The Geek Show radio program.
BUT this will be our first time going to this, the LARGEST ‘Comics’ Convention in the UK, as Dragonhide with our own table!
EXCITE!

Once again the phenomenal Tab Kimpton has created a Rainbow Road map to help you find Queer Creators/Comics/Stuff.
He is in the top left of this map, we’re in the bottom left of the Comic Village, and there’s a whole lot of lovely folks in-between.
And since there is SO MUCH to see/do/buy/play/queue/eat/regret with your weekend, here’s a brief rundown of some of our favourite folks that we know are attending ^^

In Map Order:
CE9 – Sarah Graley
Creator of ‘Our Super Adventure’ & ‘Kim Reaper’: Her work is adorable and bloody hillarious! (Hence why she works on the Rick n’ Morty comics too!). We own both of these comics by the way, love them, and are looking forward to getting ‘Pizza Witch’ too.
CF2 – Lisa ‘Baggy’ Cummins
Writes & Draws ‘Madam Butterscotch’ tea-obsessed spy comic, and ‘Momori’ queer witches gorgeously drawn. She’s also got some of THE BEST adorable charms you’ll find around. Fall in love with her art & cosplay, then go loose to her at Overwatch T-T
CN4 – Mister Lucian
Demonic Possession or Erotic Self-Expression? Maybe he’s born with it, maybe it’s Azathoth?
It’s hard to describe Lucian besides: GO SEE HIM.
Demons, Salome, Erotica, Zines, Sigils – Lucian fully tap-dances the line between erotica and light-horror. And he’s a personable delight, don’t let the fangs fool you!
CP2 – The Pride (Joe Glass)
While we all get a bit tired and sick of costumed superhero comics, due to the vast surplus of them, and the need to be 90% straight-white-male for profit margins, you too should put your jadedness aside for The Pride.
It’s a really great comic that discusses some very real-world issues through the lens of colourful fiction; and the world is better off for it’s existence. Truely.
CP8 – Hamish Steele
Creator of Deadendia and Pantheon, Hamish uses fun-sillyness to tackle some fascinatingly dark & complex subjects; from feeling like an outsider, to demons & Egyptian Gods. He is a MARVEL.

5541 – Sweatdrop Studios
British-made manga: A cross-pollination of cultures, run and drawn by some of the sweetest people you’ll meet at a con.
AU5-7 Discord Comics (Tab Kimpton)
The one who made this list! And also Khaos Komix, Shades of A, Minority Monsters, Sir Butler & Boy – and sooo much more.
Seriously good (& Diversely cast) original comics about LGBTQIA slice-of-life, coming of age, comedy or errors and existential angst.
Yes, that is a lot. And yes, someday it’ll be adapted onto Netflix. Just watch.
BC6 – Kraken Kritters
Karen’s beautiful menagerie of hand-crafted fluffy apparel, hats & accessories.
If you get cold, head this way and get FAB.

OH! And we recommend ourselves if you’re just finding this post and haven’t seen us before? ^^”
CN9 – Dragonhide Studios; Creators, Publishers & Distributors of new & progressive comics!
Come check us out for awesome comics from around the world (very really). 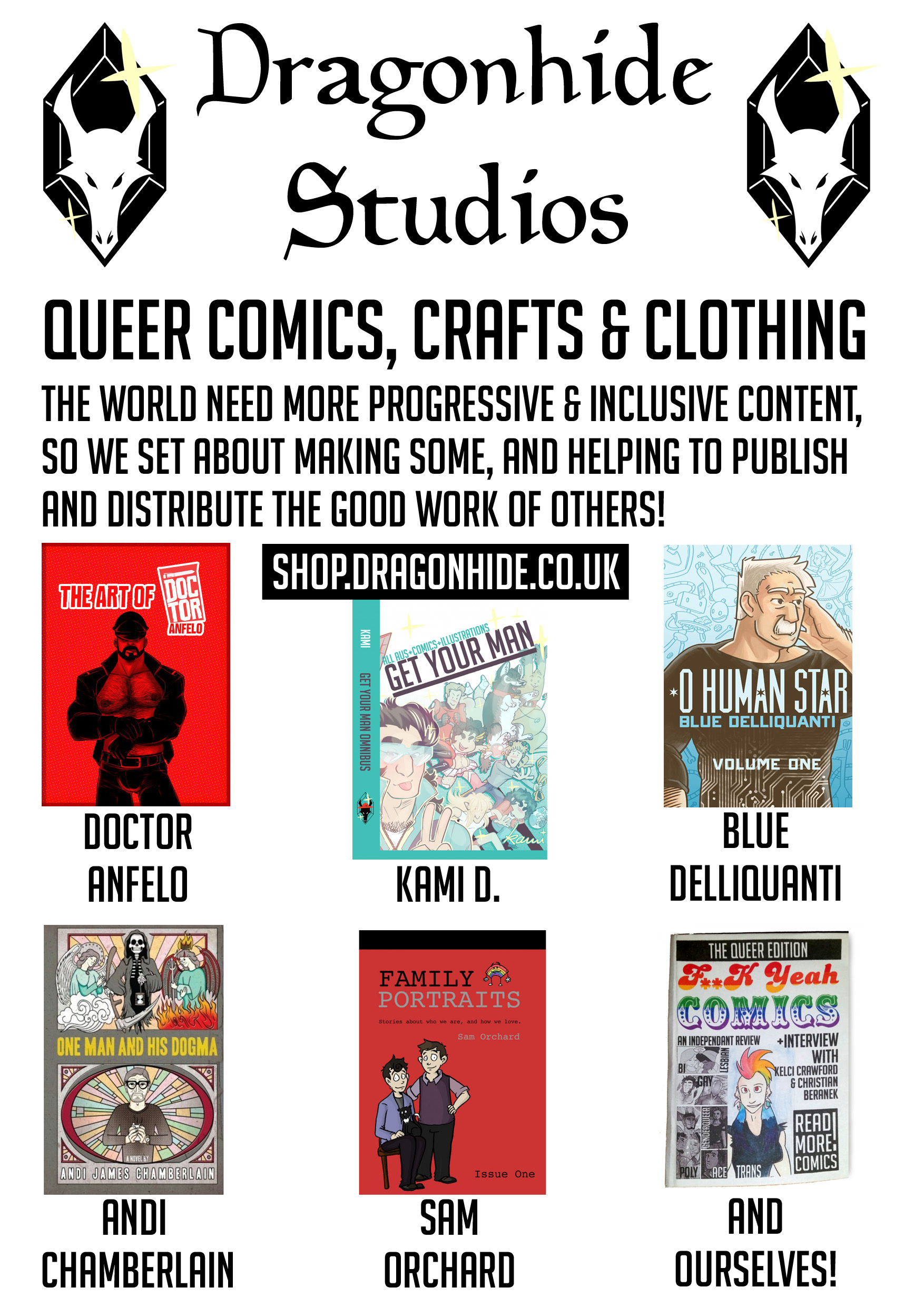