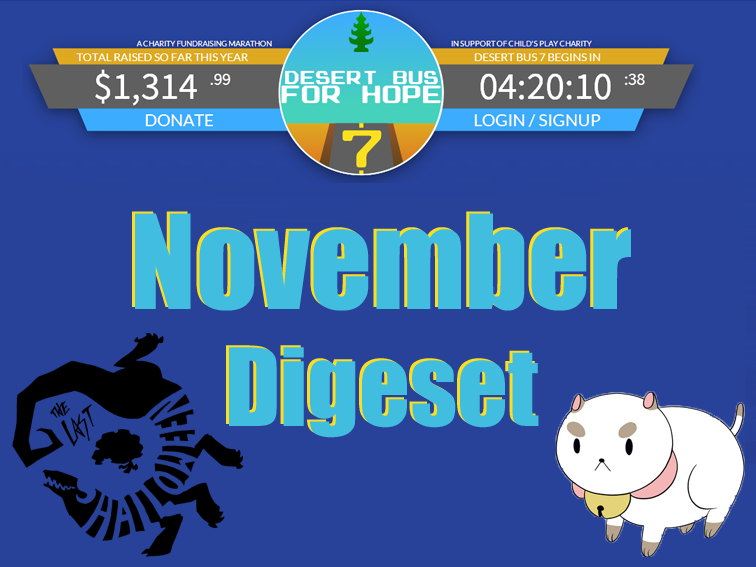 November is here, which mean’s it’s Christmas right? Like now. At least that’s what the shops are trying to tell me.
So lets start this month off with a distraction from the windows plastic now; some lovely comics, music and gaming goodness.

Desert Bus for Hope 7
The 7th Annual Desert Bus for Hope gaming marathon kicks off on Saturday, November 16, 2013 10am PST
Once again it looks to be a chaoticly cascading cavalcade of comedic charitability – The folks behind LoadingReadyRun will take turns playing Desert Bus, the most boring game in existance, for as long as people throw money at them. All proceeds go to the Child’s Play charity.
There will be special guests, auctions, prizes, requests and dancing for your viewing pleasure – so be sure to tune in and donate to the cause, it’ll likely last around a week this year so you’ll have plenty of join in on the fun.
For more info – I have interviewed Kathleen twice already, for DB5 & DB6.
desertbus.org

Bee and PuppyCat (ENDING SOON)
Remember that delightful and sparkly Carton Hangover short Bee and Puppycat? Want to see more of it? Well now is your chance to help make it happen!
Frederator is running a kickstarter for the show to have it’s own proper little series – at present it’s going to have at least 7 episodes, but there is time to help it go for even more, and pick yourself up some lovely things in the process.
If you’ve not seen the 2-part pilot already, do check it out [Here], it is a truly a gem among YouTube animation.
kickstarter.com/projects/frederator/bee-and-puppycat-the-series

FTM: International Transculture Magazine
While I do work to include Trans* Positive content here, it is not the main focus of the site – so I do know there isn’t as much genderqueerness around here as some people might want. And for those people, there is FTM: and international magazine about transculture that is currently seeking out an audiance on Kickstarter.
It’s the kind of publication that does kind of exist at the moment, but only usually as a small, local indie zine with little-to-no budget or reach.
If you want to read some well informed and experienced articles on the culture of transmasculinity – do check it out.
kickstarter.com/projects/1186191766/ftm-international-transculture-magazine

The Last Halloween
Halloween is over, potentially forever – if little Mona Merkins can’t somehow stop the apocalypse, armed with only a ragtag group of “friends”; ranging from an immortal tween vampire to a zombie hipster. That’s right, after months of waiting, Strips Search darling Abby Howard has unveiled her funny, dry, and creepy comic The Last Halloween unto the world. And so far I for one am loving it, and heartily recommend it to anyone fond of the qwerky and the spooky.
last-halloween.com

Aurelio Voltaire: Raised by Bats
Because it’s the way the world works now, Gothic-cabaret funny man and nerdy sex-god Aurelio Voltaire is offering his new album up for pre-orders and funding on IndieGogo. Raised by Bats will be his 11th studio album, and if history proves true it will likely be a lightly-dark (dimly-lit?) journey through funny and spooky tales of misfortune and gothicary.
igg.me/p/552791