Earlier today on Twitter sexual comic legend Erika Moen asked her followers what aspects of “sex/sexual health/safe sex” they wish had been (or are grateful they had been) explained to them as a teen.
Discussion is ongoing and the replies are numerous & varied – after tweeting her back 3 times I realised that I should really write an article in order to do the question justice.

I remember that the main focus of my sex education classes in secondary (high) school was “If you have sex without a condom: You will die”. That diseases & infections were transmitted through sex (STD/STIs), and while some could be cured with a course of medication, others could be life-long or fatal.
I got the gist, had the fear of sex instilled in me like others would have the fear of God instilled into them, and resolved to always use condoms or die a virgin. 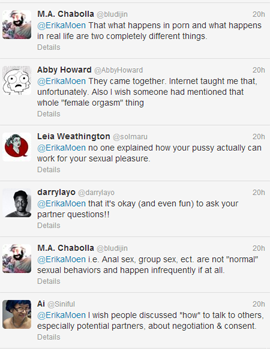 This was when I was 14-16.
I discovered sex could be enjoyable at 20.
And I first learned what the actual cause of an STD when I was 22.
– Last week. Through YouTube.

The only thing about sexual health I didn’t learn entirely on my own or post-school, was which way on a condom goes (nub upwards). And while that’s important, there is a LOT more to understand:
– The LGBTQ Spectrum
– Masturbation
– Forms of sex, other than vaginal
– ALL of the things the girls learned (We should be able to understand each other!)
– What you actually do during vaginal intercourse
For years I assumed that after inserting Tab A into slot B (Or C, Ladies? Gents?), you then… kinda… just ejaculated? Thrusting was never mentioned; as neither were foreplay, cleanup or how long the whole rigmarole can take.

There was one lesson where we were to design a new from of contraception in groups; without having had sex or understanding any form of protection other than condoms do. Therefore every group’s drawings were variations on condoms – from rubber pants with them built in, to ones with needlessly added room for the scrotum.
The winning group produced the “DoubleDom”, where you just wore two condoms. Which is what more sexually educated people would call “Double Bagging” as well as a Terrible Idea, due to the friction of rubber on rubber.

The worst thing given to us through the whole experience though was not knowledge-based, it was the sense of shame. The repetition of images and videos showing that if you were stupid enough to make mistakes during sex, you would suffer horrifying consequences. The textbook drawings of a boy at a bus stop from nowhere getting a large wet bulge in his pants, and covering it with a hat while people looked at him disgusted – to get the point across that erections happen completely randomly and you will have to learn to work around them.
And how every video we watched and story we read of were “worst case scenarios” full of STDs and pregnancy – not once did the teachers discuss their own experiences and give genuine advice, not once did we hear of a couple functioning well, we were never even told it could be FUN!


♥
Now that all the negatives are out of the way, it’s time to put my promo-hat on and show you good people where the truth about sex lives on the internet. While you shouldn’t be forced to research such a necessary thing on your own – here are great places to start while you do.
2013-06-30
Previous Post: Sexplanations: A Proper Education
Next Post: Allies and the Community?