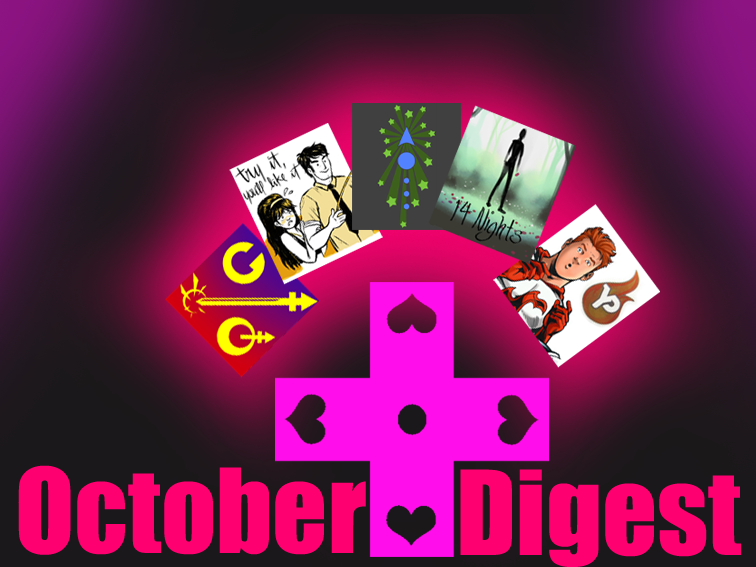 Describing some of the new additions to the Links, current Kickstarters, and other fun stuff.

14 Nights
“This story is about a guy who is afraid of sex. I wrote it because it was something I wanted to read, but didn’t seem to exist yet.” – Kristina Stipetic

I LOVE this webcomic.
From the completely unconventional characters, to the expressive art, the trippy dream sequences, the dialogue – everything.

Two men delve into a slow and gentle exploration of sexuality and relationship, facing fears in a way that is realistically unclear and inexplicit. The title refers to their agreement to try some kind of ‘sexual act’ daily, for 14 nights, and see where they find themselves at the end. I’m equally interested to see if Lucien will conclude that he can live with sex, and if Nikita may be able to live without it. Definitely worth your time.
14nights.kstipetic.com

Adam & Valerie’s comic is like OJST, but more about general experiences than specific products. It’s filled with light-hearted cautionary tales, healthy tips & tricks, and answers to reader questions – “The goal is to enrich everybody’s sexual knowledge – we’re learning, too”

It’s a charming comic with some interesting insights. And at 17 strips it’s still quite young, so it won’t take you long to blitz through it in a single session.
tryitcomic.com

Kickstarter: Loading Ready Run
The internet comedy powerhouse and video production company behind many a hit comedy show on The Escapist and PATV, as well as series for Wizards of the Coast, Nimble Bit and Cards Against Humanity.

They started out 10 whole years ago, as two guys filming comedy sketches, and throughout the decade as their team grew, their budget increased and their skills honed they’ve kept those sketches going, every week; recently hitting their 500th video!

Amidst all the new projects they want to do, and the big ones they want to continue, LRR have decided that with it’s different sets, costumes, continuities and expenses – the weekly sketch show has the largest uptake of time and resources, and after it’s many years of service, has reached it’s retirement.
…almost.

Wanting to end the series on their own terms, LRR have put up a kickstarter to pay for an 11th and final season – covering it’s props, locations, extras, contributors and time. It’s already hit funding, but there are a lot of great stretch goals still to get, so I’d highly recommend checking out the campaign.

On their non-sketch-comedy side, you may know of them through Desert Bus for Hope the fundraising gaming marathon. It that time of year again on November 16th – so save your pennies and keep an eye on the website and twitter to see what plans and prizes we can look forward to this year.
bit.ly/LRRkick | LoadingReadyRun.com

The Young Protectors
I have debated with myself for a looooong time about weather I wanted to recommend this comic, and I’ll try to describe why without hinting at spoilers…
When Alex Woolfson, author of the brilliant Artifice, released his second major comic project “The Young Protectors” I was pretty thrilled. Superheros are a pretty big thing at the moment, but hero team-ups tend to lack diversity and it can be hard to imagine a ‘typical day’ for them, given how the world is in crisis 98% of the time. YP offers well-paced development and shows some good teamwork and natural chemistry between allies.

The chapters and volume titles clearly show that this is a big project, aiming to be a lot longer than Artifice and the story is clearly just beginning.
Sadly, while it’s good to see Alex tackling his first longform comic, this is the very reason for my hesitation. There are set-ups, and plot twists, and subterfuge going on that until fully revealed is making me proceed with a lot of caution.
If some of these plot-points go one way, it’ll be pretty fantastic that anyone tackled the subject. But if they don’t… then industrial crowbars and pliers may not be able to undo my cringing.

I’m trusting in Alex’s writing skills for now though. He’s shown before that he can go all-out with his painful moments, and that his narrative arcs are very neatly thought through.
webcomics.yaoi911.com

Gender Quest
A comic I started recently about being genderqueer, confused and questioning.
I’m no great artist, but it’s not a subject I’ve seen broached by other comics, and I wanted it to exist.

I also bring it up because of #Inktober – I’m joining a bunch of other tumblr artists in making an inked piece every day this month. Search through the tag or check out the inktober.tumblr.com
genderquestcomic.tumblr.com