Well, get your clique-bingo-boards ready if you’re playing at home, In a nutshell Beyonetta is;
– One of the last of her kind
– With amnesia
– Who must fight the hoards of enemies that stalk her everywhere
– Climb a very tall tower
– And defeat a big-bad-boss
– Who controls a corporation unclearly hell-bent on destroying and/or ruling the world.

Despite this story being old-as-mould you should notice a single troupe yet un-checked; potentially my favourite thing about the game’s storyline and Bayonetta as a character – she’s not saving her romantic interest or sister from a kidnapping, she’s undertaking a quest entirely for her own reasons.
She doesn’t even want to ‘save the world’, or any bystanders for that matter; she just wants her damn memories back, and to stop all these angels from attacking her all the time.

You see for as long as she can remember (20 Years total) our protagonist been hounded by these violent feathery humanoids that average muggles can’t see – armed with only one clue “The Eyes of the World”, Bayonetta does jobs for a mafia stereotype named Enzo, in exchange for information about it’s location.

The story is driven far more by it’s characters than it’s contents though, it’s an adventure game that resembles and extra-large platformer.
The key to enjoying Beyonetta is enjoying the characters, flavour and combat, and ingoring just how many plotpoints or world-building details are brought up, only to be dropped or ignored.
This laissez-faire approach to the plotline isn’t helped by the game’s cutscene style – somewhere between an animated cutscene, and a still-image visual novel, with the benefits of neither. You see the cut-scenes as little snippets of a film reel; each slide is a mid-rez 3D image, with no animation but the wind – with some camera movement or rotation. People talk without lips moving, and nobodies limbs move – making it look both cheap and lazy.

Beyonetta – The main character, and main reason to play this game. Beyonetta hates wasting time, being talked down to and LOVES putting the people/entities that do this to her in their place. She so blatantly has fun kicking arse and being sassy that it’s a genuine joy to play as her – especially with the climate of gritty serious drama that has come with AAA titles lately.

My main argument against claims that Beyonetta is just more sexploitation and pandering – is that she herself is in control of her sexuality, and it makes sense that she is. Unlike Ivy Valentine or The Sorceress from Orcs Must Die 2 whose dominatrix-esque costumes and one-liners have no real relevance to what they actually do or their back stories.
Sure it may be pandering to have her be that way – but at least it’s a step forward from the “all women must dress like sluts” mentality we seem to get normally.

Jeanne – Friend of Foe? She’s a mysterious midmoss you fight many times in your search for the Eyes. She uses the same fighting style and weapons as Bayonetta, implying that they come from the same coven of witches. You’ll need to get your memories back before Jeanne makes sense completely, but she’s actually pretty worth the ride – a surprisingly complexly motivated character for a game this silly. And good fun towards the end of the game.

Rodin – a bartender and arms-dealer from hell itself. Has a professional relationship with Beyonetta, and give you things in exchange for the halos you pick up from angels. He’s pretty cool and clearly strong and that’s about it really.

Enzo – 2nd worst character in the game, by virtue of him being comic relief. His mafia connections and business are never really discussed, it’s mostly implied from his accent and outfit. He’s a powerless ‘normal’ with no fight in him, that like to swear and buy expensive cars. His only use in the game is to provide a river of plot exposition, and disappear from 90% of it’s contents.
He’s there at the beginning and end, and it’s the model for the ‘Stone Trophy’ you get if you can’t make it to a level’s bronze standard.

Luca – First place in the worst character awards, Luca is a boring, one-dimensional pervert straight out of Japan’s anime archetypes factory. He stalks Beyonetta around the world by sniffing the air for her perfume, get’s distracted by her breasts, and displays a completely unexplained ability to mimic Spiderman – using a grappling hook to swing in-and-out of any cut-scene in the game, alive and without ever explaining how he caught up.
All of these attributes make Luca pretty dull, but by no means “the worst”; that comes from his character ‘arc’ and exposition-vomit that tops Enzo a million times over.
A self-declared journalist, despite never mentioning having written about or researched anything other than Beyonetta and her background, Luca has researched the entire script of the game in advanced and despite accusing our protagonist of murder, proceeds to tell her literally everything there is to know about the war between the Umbra Witches and the Lumen Sages.
This guy’s job is to turn up and tell us why we’ve come to the location we’re at, after we’ve arrived there already.
He’d be a love interest if Beyonetta cared about his existence (or anyone’s, which she doesn’t), he’d be a proper character if he actually had a life outside of her, and his arc would be over a lot faster if Beyonetta just told him the truth of his father’s murder. She withholds that information for the entire game for no real reason, and he has to figure it out on his own through flashbacks of the same scene. I’d call this a spoiler if it wasn’t so massively obvious and lame. 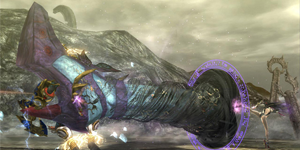 A button-mashing beat-em-up; Bayonetta’s combat plays an awful lot like that of the Batman Arkham series – mash the Punching and Kicking buttons like you’re trying to break a Diglett’s neck, breaking only to dodge/counter or perform a special take-down.

The main difference here being that Batman doesn’t have super-powers. Bayonetta on the other hand is a time-manipulating, superhuman acrobat with giraffe-legs and hair that can turn pretty much anything ‘because magic’. The more buttons you press, the more hits you do in a combo, and if you alternate the kicks and punches, she’ll use a Wicked Weave; a slower and stronger move that wallops your foes with a giant shoe (made of hair) with the force of a small car.
If you have enough magic power, you can use a Torture Attack to summon a rack, guillotine or… chainsaw? And mash a specific button for maximum damage. These are all either instruments of torture/execution, or dungeon-play; like the pommel-horse you tie angels to and spank them to death.

The game’s combat is incredibly fast-paced and mostly relies on your reactions; while whaling on an enemy for a combo-bonus you you’re basically watching out for either it breaking out of your control, or something else hitting you from behind. Remember how in that Batman analogy you could see enemies coming from the sparks over their heads, and counter them relatively easily? Well, that’s where Bayonetta’s difficulty comes in – you get no such obvious prompt. Combat revolves around your ability to see attacks coming and get out of the way – Dodging at the last moment gives you Witch Time, where the world slows down and you can start off a combo uninterrupted.

It can take quite a while to get used to this, especially as the game starts throwing faster enemies at you in large quantities. The recurring tougher enemies always come into twos or threes, all the better to make you earn your progression through the level.
There is also a feature where you take the weapons of fallen enemies to spice things up – but pretty much all of them are short-ranged and slow, so they’re terrible to use. Excluding perhaps the spear you use as a stripper-pole to spin around beat enemies up like a sexy version of Neo. 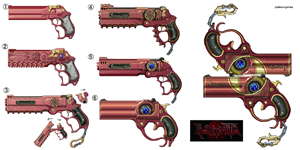 Optional weaponry is not the worst part combat though; There are also several completely random vehicle sections with god-awful controls, and two occasions where you badly try to move a bullet (as you do) to dodge past things and shot very small and specific targets. But by far the most annoying aspect of the entire experience is insta-death quick-time-events. These QTEs seem to come out of nowhere, kill you immediately, and usually require you to re-weaken an enemy before you can try again, as the whole game has a no idea where to put it’s checkpoints.

These QTEs and checkpoint placements are part of Beyonetta’s love of punishing you for not being good enough. Like the recent Sonic The Hedgehogs that nobody really like or plays, the game grades you on how well you complete a level; you get medals for each little fight scene or ‘verse’, and a trophy for each level or ‘chapter’ you complete. These range from Stone, Bronze, Silver, Gold, Platinum or Pure Platinum; I got pure platinum medals very occasionally, as they require absolute perfection (no damage, fast completion and big combos) and stone trophies on almost every single level.
One of the things that can grind you down is how stone seems to be the level achievement for trophies – not bronze; which feels like you are rewarded for doing incredibly well, and punished for doing ‘okay’. While you can complete a level easily you’ll rarely do it well enough for the game to congratulate you for it… and that kinda sucks.

This does make sense once you start finding some of the hidden fights, challenges and rewards, because this game is filled with them. Completionists beware; there is a lot to find in each chapter, and without a walkthrough it’s gonna take a lot of attempts to find it all.

I really can’t deny that Beyonetta is not a good game. It’s doesn’t care about it’s thinly-woven and unimaginative plotline, it’s side-characters have no lives of their own, and it’s ability to frustrate and punish the player knows no bounds. But I was able to play through the whole thing, and genuinely enjoy it. Bayonetta herself is a fantastic character to play as – she’s fun, sassy and can make you feel like some manner of god as you tear enemies apart as if they were cardboard boxes filled with jam.

… will I be playing it again on hard mode, or using another unlockable character? Oh hell no!
Would it have been worth it’s £40 retail price? Christ no – if you can find it for under £15 2nd hand then go for it, it’s a fun romp – but otherwise leave it alone.