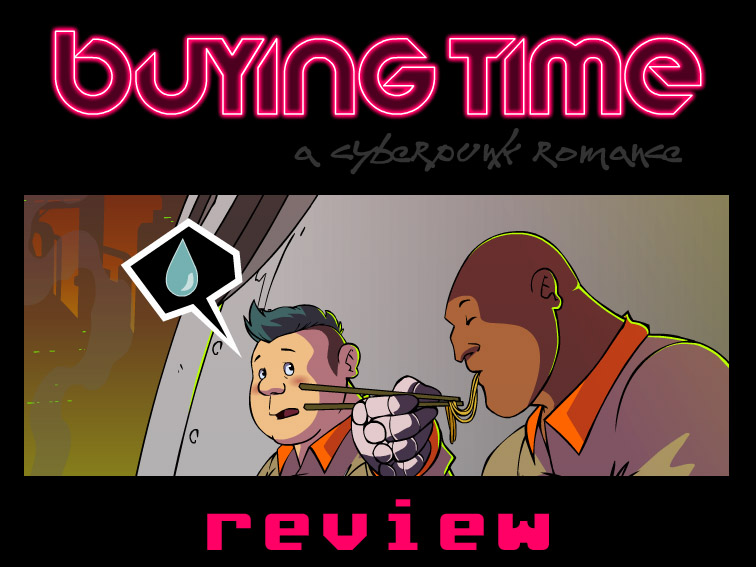 Even if the romantic sci-fi genre doesn’t appeal to you, this is a comic you’re going to want to check out: A fully animated endevor where a single page can contain literally dozens of panels – an innovation allowing for far more control over the comic’s pacing, and helping a scene of ‘character talks to phone for 10 speech bubbles’ still look visually engaging and dynamic.

The story centres around Vinnie Smalls; a nervous and self-conscious introvert, and his attempts to be more social, romantic and creative – in a society where those things are getting very expensive to do.

Setting
Hyperion City is a multi-level structure, inside of a large crater. The lower levels are mainly for work, maintenance and living for those without much money. The higher ones are fancier, expensive and get some even get natural light.
Wasn’t kidding about the commentary and logical extremes here – the rich are literally above everyone else.
There’s a Dynamic Map that breaks it down very well [Link] because the comic is awesome like that.

Alot of the comics focus is how “The DLC System” affects the way people live and communicate.
You “buy” entertainment and the allowance to socialise through ‘Daily Leisure Credit’. Imagine if mobile phone call rates were essentially applied to all forms of human interaction, and the very entering of nice establishments.

Vinnie become a rather quiet loner by the start of the comic because he literally can’t afford to hang out with people. If you talk to someone for more than a few seconds, a timer starts and you get charged.

Cast
– Vinnie Smalls
Our socially nervous main character, Vinnie is very relatable – struggling with his self esteem and weight issues, shyness and his kindof dead-end job as a welder, on literally the lowest level there is. Without the luxury of a social life (with what 3 friends he has), Vinnie has become rather reclusive.
He is one of the main reasons this comic is completely adorable.

– Galvin
Vinnie’s crush from work, Galvin has a very “Augustus Waters” feel to him – survived something life-threatening and coming out good-humoured, attractive and not wanting to deprive himself of beautiful things.
I don’t think he’s quite a “Gary Stu“, he’s all-round a pretty damn awesome, lovely, kind and generous human being – but he can be just a little bit sly when it comes to getting want he wants, without others knowing.

The rest of the cast are all either Vinnie’s friends from the bar, Hot Legs, or from Galvin’s strikeball team.
A delightful mix of personalities, accents, genders and cybernetic-implant-percentage.
Look forward to them, they really bring out a lot of the comics humour. 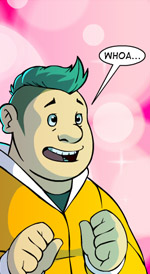 Art
The artwork is pretty damn lovely – characters are very expressive and easy to read, the technology and robotics are all consistently styled and cool, and the colour palette of the 80’s neon-dreams of cyberpunk really makes it ‘pop’ off the page. The lower levels being grimy and dark, and the higher ones looking like sets from The 5th Element and Ultraviolet.

Support
As far as I could find from searching, Buying Time doesn’t currently have any official social media sites, or a related Patreon account.
But there are site sections for Donations and Fan Art, and a buzzing community in the comments under pages. Plus a picture link if you want to send people in it’s general direction.

I guess the project’s only real downfall is that it is too modern to work with older media. I’d love to ‘buy’ the comic or it’s merch, but how can you go about printing an animated thing? To print still images only would require a lot of redesign of the panels, and a loss of it’s unique charm.

Thoughts?
Buying Time is awesome. Just really damn good. The characters are funny, adorable and gorgeously designed, the story is compelling and doesn’t trip over itself with speed (like many romances can do). And it’s just so refreshing to see a not-quite-dystopian future where the plot revolves around people just trying to deal with it, rather than overthrow a tyrannical system. I genuinely can’t think of ANY other comics with this approach.

Buying Time one-weekly on Sundays.
It can be read for free at: buyingtime.the-comic.org