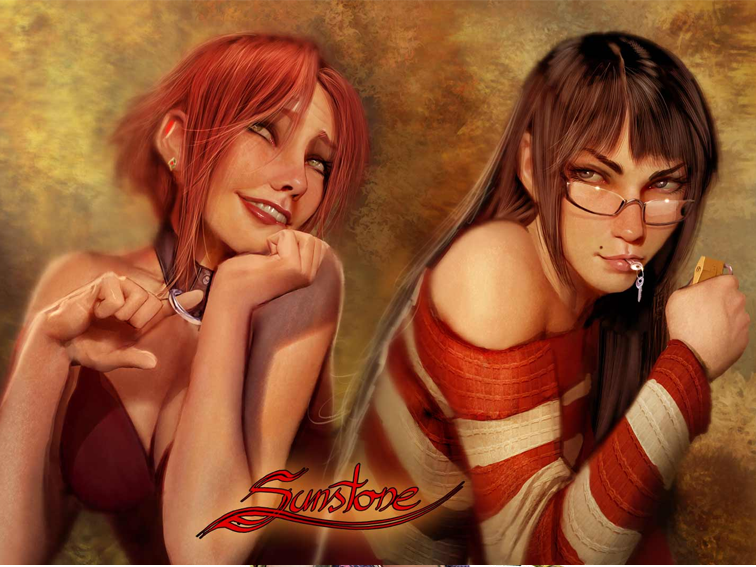 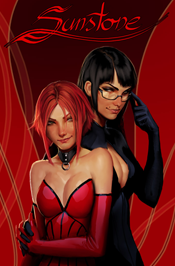 Sunstone is the first, and to this date only comic I’ve read that focuses on the relationship between a Sub and Dom that act like real humans. They talk outside of sex, have jobs, pay bills and most importantly; don’t go to a goddamn High School.

There are two major styles; a sketch-like, but detailed one that allows the pages to come out so frequently. Which has great colouring, shades and backgrounds ect.
And an insanely detailed semi-realistic style, with skin colouring reminiscent of Mentaiko, but with hair/fibre detail that goes way beyond him: Somewhere between a pixar CGI and a painting.

PLOT
The pretence is incredibly simple; two women meet online, become friends with some casual flirting, and as things escalate they decide to meet – with explicit intentions. Quote the author: “there was no force used, or drugs or mind control….or whatever else….they just needed each other….cause in the end … everyone needs somebody”

After worrying that they’d signed up for disaster the two meet, talk and do it; consensually and mutually. Even the panels of sex have a purpose here – visually showing how the “Game” is played while the sub, Lisa talks to the reader about the attraction to and roles within Sub-Dom sex in thought boxes. This is a pretty normal setup for the many sexual scenes to come – but with the relationship between them progressing, it really doesn’t seem to tire or become repetitive.

Nothing too unbelievable happens, and while Ally (the dom) does nearly fall into my pet-hate plot-point; the “Idle Rich” who can magically pay for everything, she by references her coding job quite a bit, and even does a little of it on-page. 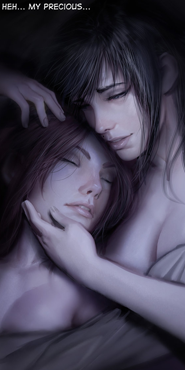 While Lisa, Ally and the supporting cast are all interesting and many-layered individuals, there is a lot of subversion of stereotypes going on here that I think really deserves praise.

While Ally is the dom of the relationship, a role often associated with power complexes and cruelty, she is constantly worried that she’s going to hurt Lisa. To such an extent that a phobia of hers is brought to the surface she completely breaks down, and Lisa is the one who has to help her through it.
Similarly Lisa, despite being a sub, is usually confident, adventurous and can get pretty aggressive when she’s annoyed. She’s far from the nervous and shivering little ‘uke’ that has been coerced into this role so many times – lacking a spine to use in defending their doubts.
And neither of them are addicts with no control over their desires either – their sessions are scheduled around their day jobs, and cancellations are not impossible things.

Shinez also cleverly has made neither character a definited “lesbian” before the story starts. BSDM is a sexual ‘game’ to them and after finding the perfect partners to play it with both characters have to come to terms with what that means for their orientations.

VERDICT
Sunstone is a gorgeous and engrossing story that deserves to be read. Strongly recommended reading for anyone with the mildest interest in any of the topics it covers, or just a solid and realistic adult ‘romantic’ sex story.

The comic doesn’t yet have a website or printed form, but can be found, separated by chapter, on the creator’s deviantART gallery: shiniez.deviantart.com/gallery