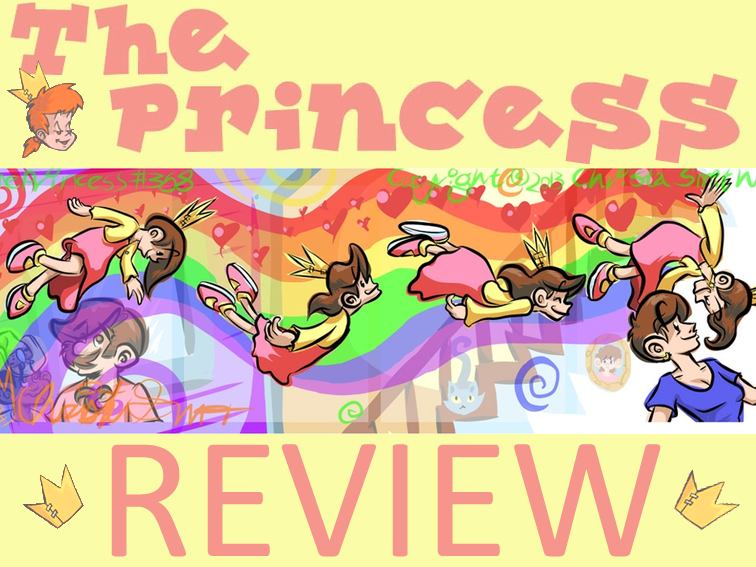 The Princess is the Queer Press Grant winning comic by Christine Smith, about the adventures of a young transgirl struggling for acceptance. Charming, funny and colourful – this story is clearly written by someone who understands the inquisitive, stubborn and (usually) innocent nature of children. 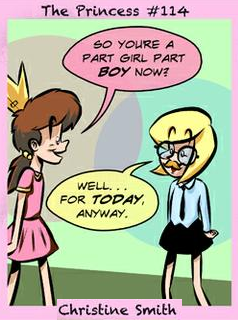 Sarah is an excellently written and realistic girly-girl; she loves boys, pink, ponies, the lot. Much of the comic’s charm revolves around her just wanting to have fun and be nice to people. And not being out for attention she is usually the last person to bring up her being Trans*. When shamed she digs her heels in though, and then no-one has chance of stopping her asserting her identity and wearing what she wants (see strip #150, embedded below).
There is a lot for readers to relate to and idolise about Sarah; her role as protagonist is well earned.

Irma is the winner of the 2013 “Bestest person ever” awards. Hilarious, loyal and scrappy, she is the ultimate friend to Sarah. Not only is she accepting of her friend’s new found identity, but she embraces it; letting Sarah get changed at her house, asking her positive and progressive questions, and walking to school wearing a variety of brilliant moustaches, monocles and rockstar costumes that make our protagonist look like her foil.
I honestly believe every comic, TV series and film on earth could be made better by an Irma cameo.

Wendy is one of the most well discussed parents of an LGBTQ person I’ve seen to date. In every comic I read the reaction to coming out is usually an outright “Yey!” or “Nay!” when in reality there a lot of Wendys out there who do love their child, but struggle to understand and support them.
In trying to protect the child she knows as her son from the bullying and depression that can come with being Trans*, she winds up causing it. Her arc is one of learning about and re-establishing her relationship with Sarah, and it’s really compelling to watch her emotional struggle.

Chuck is our sympathetic bully, he picks on Sarah because he’s confused by her and aggression is how he’s learned to vent his frustrations from a bad home life. He and the girls used to be friends but he just can’t compute that his old friend Seth, the weirdo Sarah, and this cute brunette he’s developed a crush on – are in fact all the same person.
I’ll take a conflicted ‘villian’ over a ‘pure evil’ one any day of the week, and when later compared to his mother and sister, it’s very clear that Chuck is a pretty typical kid; acting out of frustration, and not cruelty.

If you’ve been hankering to read something where realistic children react to discovering queerness, or watch a trans* character never back down in their fight for pink sparkly unicorns (and acceptance), then I can’t recommend anything more highly than The Princess.

Check it out at The-Princess.funonthe.net and follow the author @PrincessComics